I’m often asked how the opportunity to illustrate Hababy’s Christmas Eve came about. How did I meet Jamie? And how did he decide to work with me?

I met Jamie Farr when he was touring to promote his autobiography, Just Farr Fun. I was living in Raleigh at the time working as the Community Relations/Events Coordinator for Barnes & Noble Booksellers. My job was to coordinate events and ensure that author book signings went smoothly. Jamie Farr drew quite a crowd as M*A*S*H fans flocked the store to meet him and get books signed. Jamie’s schedule had him staying in Raleigh for an extra day before heading to his next signing, so my job expanded to include accompanying him around town. 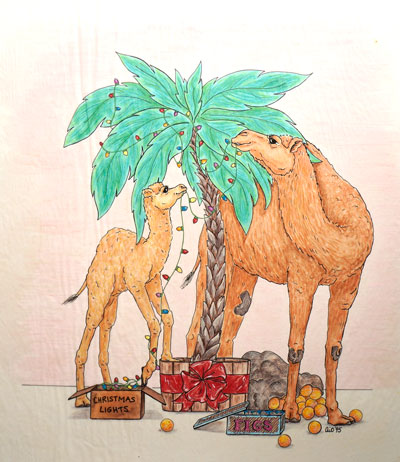 It was during this time that I discovered how challenging it is to be a celebrity. It was near impossible to eat out without meals being constantly interrupted. He was courteous to all, even as his meals got cold. It was wonderful to find that celebrity as Jamie is, he was really great to hang out with and easy to talk to. (I also got to see the workings of the local radio station when he went for a live on-air interview, which was great fun.)

Throughout the day he asked about my future dreams and discovered that I loved to illustrate. A few months later, he called me at work to ask if I would be interested in illustrating a children’s book he and his wife had written. I had illustrated many smaller items such as greeting cards, album covers and short stories, but this would be my first full-length picture book. Needless to say, I was excited to be provided the opportunity.

My visions for the characters matched theirs, so soon the text arrived and I set to work illustrating the scenes and laying out the book pages.